Test movies
Posted by Margie at 5:07 PM No comments:

Bitterness is a tough pill to swallow.
But it's difficult to know the line between bitterness and jealousy...it's so fine at times.

But I see others spending money left and right, and I feel bitterness.
Towards what, or whom, I do not know.
So perhaps it is jealousy.

Jealousy that we still struggle financially.
That we can't pull together enough money for a downpayment on this house. And bitterness that our credit is so bad that we can't get a normal mortgage.

Yeah...that's not anyone's fault, but I still feel this edge of bitterness deep in my throat.

Sometimes it rears its ugly head and I feel...exhausted.
Posted by Margie at 8:57 PM No comments:

Fishin' at the Pond 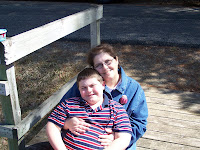 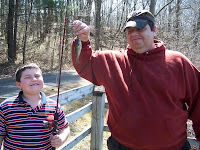 It was a perfect afternoon, and I'm so glad I did it!
I took the afternoon off to go fishing with George and Kent.
George had been on Spring Break all week, at home with Kent, so pretty much spending all his time alone. And Kent promised to take him fishing one day.
I met them at Burger King for lunch, then we headed to the Rearing Ponds. I'd hoped for solace and privacy and quiet. But so did a bunch of other people because there were tons of people around.
Still, it was a perfect day, and George had a lot of fun.

He caught 4 tiny fish, and his friend Chase was there with his family, too.
Tomorrow, April 11, George's friend Andrew is having a birthday party at the Rearing Ponds. I hope it's not too cold.
Posted by Margie at 7:27 AM No comments:

I have pretty good intuition, I think. Which is why it surprises me when I don't follow my own intuition.

George went home with a friend after school yesterday. Rode the bus home and everything.

I was on my way home when they called to see if he could stay longer. We negotiated a bit, and decided I'd pick him up at 7:30. I was concerned about getting him home in time to do his homework.

But then I remembered that they don't have school today.

I take Maggie and drive over to Jon's, where they ask if George can spend the night. So I go home to pick up his pajamas. While I'm there I get this feeling like I should take him a bottle of water.

Because I don't have a bottle for Jon. And I don't want to offend Carrie, Jon's mom.

And so, I give George his jammies and he asks me if I'll go home and get him a drink.

I should know better than not to listen to my instincts!!

On another note, I wish kids wanted to play at our house. Unfortunately, with Kent's work and sleep schedule it's really difficult to have kids over. Kent only has Sunday night and Monday night off. .... It was a problem with Vanessa, too, but we worked it out. But I can't quite remember how.

Of course girls were a lot more quiet than boys!
Posted by Margie at 7:19 AM No comments:

I'm still trying to get George broken from sleeping with me. It's not working too well. I can sit with him 'til he falls asleep and then in an hour or two or three he's awake and slipping into my room.

Secretly, I feel safer having him near me. I felt that way with Vanessa, too.

Lately, George is not going to bed as he ought. So he's losing a solid hour or so of sleep each night. First it was because spring break was coming, now it's because he's getting back into the swing of things with spring break being over.

Eventually Kent comes home from work and calls me. This is the real alarm. Definitely time to get up!

I get up. He gets up. I go potty. He goes downstairs and covers up on the couch.

I go downstairs and start looking for something to wear.

I have nothing to wear.

George's turn to get dressed.

But I know it's only the beginning so I either (1) get in the shower or (2) head upstairs to go to the bathroom or find something to wear or (3) decide to treat myself to a few moments of blog time.

And I listen to this with a small smile on my face: Kent deserves to deal with this.
It's his turn.
I did it for years.

Well, time for the shower.
I still don't have anything to wear.
And those shoes hurt my feet.
That shirt doesn't look right.
I wore that last week.
Maggie, dog, leave me alone.
Get out of my room!
What are you eating!!????
Posted by Margie at 7:45 AM No comments:

And then there was green....

Here it was, April 5. Two days after my 16-year anniversary. And the weather forecast mentioned snow.

I didn't give it much thought. A dusting, I figured, would be great. It would hide the dead leaves from last year that we never got all the way raked up.

But, once again, God had his humor all ready for me. Because when I woke up on Monday morning He'd left a beautiful scene outside my door: almost 7 inches of snow.

The heaviest snow ever.

I could barely shovel. In fact, I was able to lift only half a shovelful at a time.

By the time I got a path to the the truck, and then the truck itself uncovered I was NOT happy with my husband. I was exhausted!

The afternoon sun melted about half of the snow, even though temperatures remained around 34 degrees. The same happened this afternoon.

On the way home this evening, you could see patches where the snow had melted away. And guess what?

The grass is suddenly green!

It went to bed ugly and brown and dead.

And woke today beautiful and full of promise.

Remind me of this in two months when I'm complaining about having to mow the grass, okay?
Posted by Margie at 7:52 PM No comments:

There's one part of this movie that I have a huge problem with. Annette Benning's character is invited to the White House for "meatloaf night". When Annette arrives, first-daughter, Lucy greets her saying that her father told gave her instructions to tell Sydney that he's on the phone with his dentist.

This WOULD NOT HAPPEN. Not even if you were on a first date with some joe-schmoe.

Let's review that Sydney is dating the most powerful man in the country. In the world. Do the writers honestly believe that she's going to ask who the President of the United States is talking to?? I don't think so!!!

Another scene that bothers me is the billiard scene where Andrew Shepherd, president, tells his chief of staff, played by the wonderful Martin Sheen, that, when they're alone that Martin's character can call the president "Andy".

This bugs me because he's in his THIRD YEAR as president. Like this subject wouldn't have come up before now!! Sheesh!!
Posted by Margie at 11:22 AM No comments:

Margie
Jonesville, MI, United States
Life is so many things. When I write, I imagine sitting on the front porch of my mamo and papo's home in Kentucky sharing tales of the days' happenings with my family.