My sister cries at parades.
I'm not sure why.

It doesn't seem to matter whether or not she knows someone who is featured in the parade.  The bands start playing, the firetrucks start blowing their horns, and the tears start welling up in her eyes.

I love that about her.

This past Sunday my son competed in his first baseball tournament.
Don't get me wrong: he's been playing baseball since he was 4.  Usually two leagues each summer.
And for the past 3 or 4 years he's been selected for the All-Star team in the Pee Wee league in our hometown.

But this was "For Real."

Their team entered the tournament in first place.  Their first game was a 1:00, and if they won they'd play again at 5:00.  The coaches anticipated that we'd be in the final playoff game at 5p.m. against the #2 team..."The Camouflage Team".
The coaches would be wrong.

We started the first game at 1:00.  An hour later, the game was delayed due to lightning.  It was miserable. But the kids didn't mind.  In the end, they won the game by 5+ points, if memory serves.  (I have to keep score on a pad or I can't remember anything.  Since I don't have my paper with me I can't remember anything about this game--not even the name of the opposing team.  Though I'm pretty sure they were yellow....?)

My mom and dad surprised George by showing up to watch his game, so we went home for an hour or so to give George a change to cool down while The Camo Team played their first game of the tournament. We returned to the field around 4:40, only to discover that our game would not begin until closer to 6:00 due to the rain delay.  So we had a few minutes to watch the The Camo Team play.

It was not a pretty sight.
They lost by ... a lot.
Against the Red Team.

I was bummed.  Cause if we were going to lose, I was okay with losing to the Camo Team.  Their coach seemed real personable and always knew George by sight and name.  Was always positive toward our players and seemed to joke around with our coaches.  The Red Team?  Well, I don't even KNOW them.

I quickly search through my score notebook to see how things worked out over the course of the season.  We'd played the Red Team at least three times.  The first time we stomped all over them:  won by almost ten runs.  But each time we played them, they'd improved considerably.  And even though we won each of those games, their stats gave me pause for concern.

So there we were: the red team ready to start the final game.
But some of the Orange Team (us) players had yet to show up so we had to wait until about 6:00, afterall.

By then, the sun was out and the rain had stopped.  And when the wind blew a breeze it was quite pleasant.

The first inning started, and it was going fine. 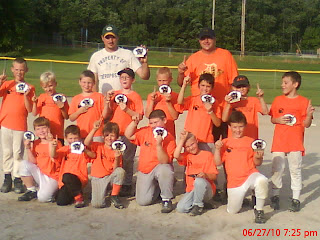 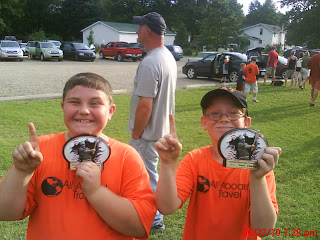 Posted by Margie at 3:08 PM No comments:

I'll be sitting here.
Or standing there.
When it hits me.
NOW.
I'm hot.

And as suddenly as it comes on it can go away.
But when it does start, it's an immediate need that has to be met.

With a fan.
An airconditioner.
Some ice.
Laying in the floor.

And it makes me very thankful that we have ceramic tile in the kitchen.  It's a backup for my heat flashes.

And this is just the beginning.
Posted by Margie at 10:05 PM No comments:

Keepin' It In the Family

I just got an email from my sister that she's started a blog.  I'm completely excited about it!  And a cool name, too:  whatsgoingonwiththekennedys.blogspot.com.

Remember the excitement of picking out the name of your blog?  :)
Posted by Margie at 12:02 PM No comments:

Margie
Jonesville, MI, United States
Life is so many things. When I write, I imagine sitting on the front porch of my mamo and papo's home in Kentucky sharing tales of the days' happenings with my family.